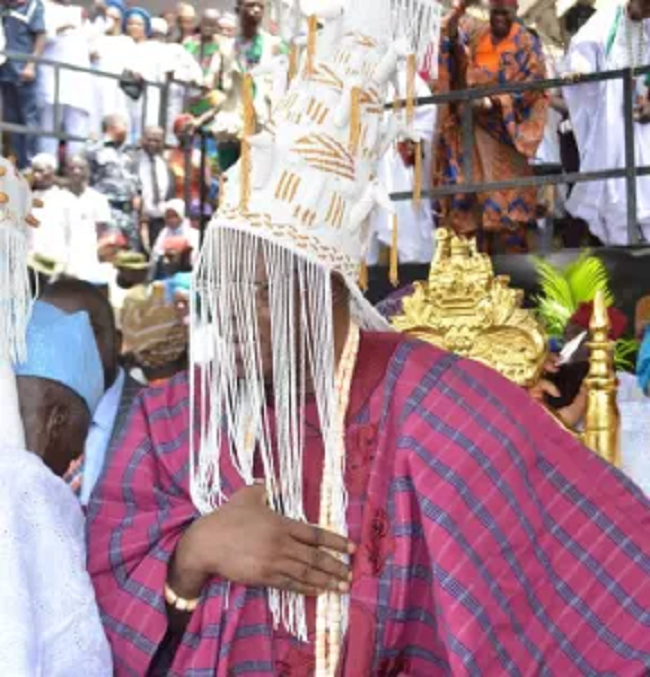 The coronation ceremony of the new Olubadan which held at the historic Mapo hall, Ibadan was witnessed by eminent personalities from all walks of life ranging from the Nigeria’s Vice-President, Prof. Yemi Osinbajo; Ex-Vice President, Atiku Abubakar; the Alaafin of Oyo, Oba Lamidi Adeyemi and the Ooni of Ife, Oba Adeyeye Ogunwusi.

The arrival of the Vice-President signalled the official commencement of the ceremony attended by thousands of Ibadan residents from home and abroad.

There was heavy security presence in Ibadan, as more dignitaries arrived the venue.

In his acceptance speech shortly after receiving the staff of office, the Olubadan of Ibadanland, Oba Lekan Balogun appreciated the state Governor, Engr. Seyi Makinde who was the chief host and other distinguished guests present at his coronation ceremony.

According to him ” in furtherance of the unequal loyalty your Excellency has for the state and your unalloyed respect for the Olubadan stool, I, Oba (Dr.) Mohood Olalekan Ishola Balogun, the 42nd Olubadan of Ibadan, hereby accept the staff of office as the new Olubadan of Ibadan today the 11th of March 2022.

“To the good people of Ibadan land particularly the entire members of the Olubadan in council, I say thank you for your cooperation and understanding as you stood solidly behind the integrity of the Olubadan stool and the age-long tradition of Ibadanland. I am proud of you all, to all our invited guests, I wish you God’s mercy and protection as you journey back to your various destinations.”